Growing vegetables is more than just setting seed in the ground. Garden beds need to be built. Soil has to be amended. There’s also watering, weeding, repairing tools, harvesting and distributing produce.

It takes time and work – just as it does for military veterans to learn to cope with PTSD and other war-related issues.

Lake County-area veterans are finding Growing Healthy Veterans, a nonprofit based in Grayslake can be part of that healing.

“The activity of growing food gets you out of your head, and gives you a connection to the earth and the healing properties of soil,” said Lukan Paulus, a Waukegan resident who co-founded the nonprofit in 2016 with U.S. Air Force veteran Marshall Fox of North Chicago.

Paulus, who is certified in sustainable agriculture and horticultural therapy, said he believes the healing comes from a sense of purpose, as well as working with your hands.

Veterans also find a community of like-minded individuals, with whom they can talk without judgment, said Fox, who works at the Capt. James H. Lovell Health Center in North Chicago.

Several years ago, Paulus and his mother, Ellen Ewing of Grayslake, met Fox and Susanne Brown, a recreational therapist at the Lovell Center. Brown suggested her PTSD patients could benefit from gardening projects, Fox recalled.

Further meetings produced Growing Healthy Veterans, which has since received donations of land from groups such as the Gurnee American Legion Post 771 and the city of North Chicago for growing food.

Veterans and other community members have been working the soil; planting and harvesting kale, tomatoes, peppers, pumpkins and sunflowers; and building hoop houses from donated materials to extend the growing season. They’ve also given produce to local food pantries. 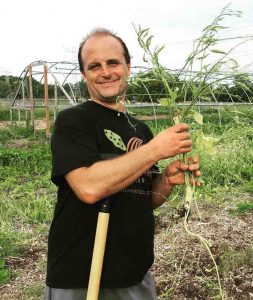 Dennis Berg, a 74-year-old Vietnam War veteran who volunteers with Growing Healthy Foods, said it wasn’t until about a year ago that he was able to speak in public about his years in service.

Veterans and other community members have been working the soil; planting and harvesting kale, tomatoes, peppers, pumpkins and sunflowers; and building hoop houses from donated materials to extend the growing season. They’ve also given produce to local food pantries.

The Grayslake resident added that it wasn’t until 2004 – more than three decades after the Vietnam War ended – that he admitted he had issues with moral injury.

Moral injury, as defined by the Disabled American Veterans, is the feeling of having violated a moral compass. It can result in reliving the event, trust issues and drug and alcohol abuse, according to the DAV, which was founded in 1920.

Berg has found working with doctors at the Lovell Center, belonging to groups for veterans with PTSD and moral injury, and volunteering for groups such as Growing Healthy Veterans has helped him cope.

He served with the U.S. Marine Corps as a heavy equipment operator in Vietnam, and came home to an unwelcoming America, he said.

Among his many difficult experiences was triggering a land mine and ending up in the hospital.

“It puts you on edge,” Berg said. To this day, he said loud noises can trigger physical reactions. “It’s something that never goes away.”

Recently, while at a show at Disney World, a woman asked if she could sit next to him.

“They shut the lights off, a canon went off and the woman ended three foot sideways,” he said. He doesn’t remember what happened, but believes his reaction to the canon is what sent the woman to the floor.

A recipient of two Purple Hearts, Berg said his wife, Janice, has stood by him for 49 years. “We raised two boys. One enlisted in the Marine Corps and got killed,” he said, tears rolling underneath his sunglasses.

He said therapy, as well as volunteering, has taught him: “If it feels good to cry.”

Berg has volunteered at Rosalind Franklin University in North Chicago to serve as new patient for medical students. He found it gratifying. “After the first time I did it, I said, ‘Put me at the top of the list,’” he said.

He said he volunteers with Growing Healthy Veterans because working in a garden, “keeps the mind away from combat.”

It’s also a retreat to easier times.”I grew up on a farm,” Berg said. “In the spring, we planted seed. We harvested crops in summer and fall, and milked cows every day of the year.”

Harvest time is over for Growing Healthy Veterans, so now Berg is helping amend the soil at a Gurnee plot. Berg and Paulus visit Tighthead Brewery in Mundelein to pick up brewery mash to add to the Gurnee garden.

“We get 8,000 pounds of brewery mash a week that would otherwise go right into the dump,” said Paulus, as a brewery employee helped him get huge barrels of mash into a pickup truck.

They deliver the mash to the donated food plots at the Gurnee American Legion, and mix it into the soil, along with wood chips and food waste.

Fox said since the program began, he could tell it could benefit veterans, including himself. “They’re able to open up. There’s no judgment, no criticism. They can talk about the problems if they want to, and get healing that way,” he said.

“Even for me, not having the issues some of these guys and gals have, it’s helped me tremendously. I’m able to put everything to the side and just focus on the task at hand. You’ve got vets from the Vietnam War taking to these young kids coming out of Afghanistan and Iraq. We really help them, I think, talk about issues they’re going through now.” Members range in age from the 30s to 70s, he said.

Growth Healthy Veterans President, Jim Huisel, said younger veterans are seeking hands-on activities and are interested in sustainability. The nonprofit provides that, said Huisel, a veteran of the U.S. Army and former commander of the Gurnee American Legion Post which donated land to Growing Healthy Veterans.

“You have to do things that are more relevant to this generation. They want to do something outside that’s good for them,” he said.

Fox agreed. “Vets like to build things,” he said. The group gives them an opportunity to work with tools, erect structures such as hoop houses and do something good, he said. For example, anything they grew that they didn’t take, they donated to food pantries. “That’s been part of our mission from the beginning,” Fox said. 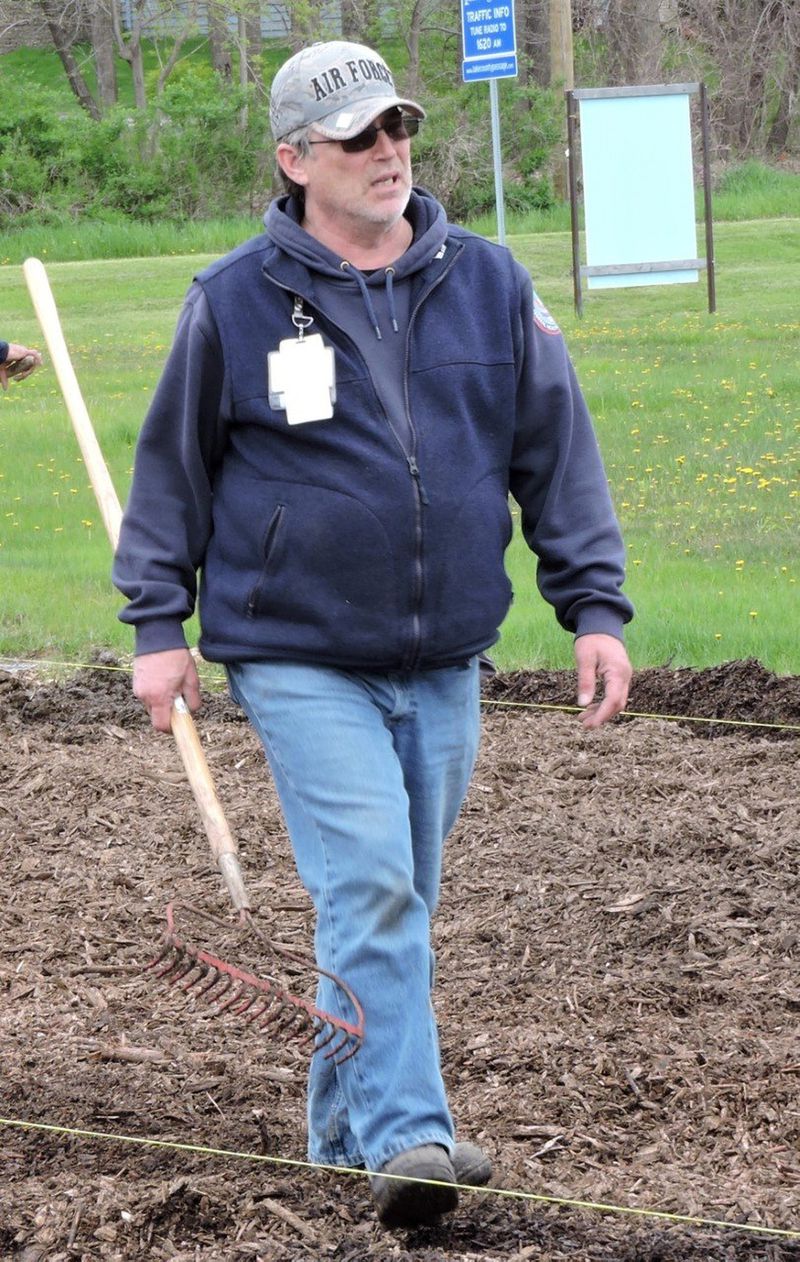 In June, the organization saved more than 17,900 pounds of food from being landfilled. “The food came from the Northern Illinois Food Depository, which had received an especially large delivery,” said Ellen Ewing, the group’s secretary.

“They were only able to disperse a fraction of what they received to food pantries and soup kitchens,” she said. Volunteers including veterans gathered to help distribute the food to those in need, she said.

With the pandemic, fewer veterans are able to get outside to the gardens, Fox said. So he’s providing online gardening classes, called Zoom to Bloom, to veterans living at the Lovell Center.

“Veterans have iPads so they can talk to their families and watch the Zoom programs. “We’re talking about doing a miniature hoop house so we can grow radishes and kale, and get them gardening through December,” Fox said.

Fox said he remains committed to growing the nonprofit, along with remaining safe during COVID-19.

Ewing said it’s important to maintain the group to help veterans – she’s heard what it can do for them. She recalled that one of the volunteer veterans told her he had been on five tours of duty in the Mideast and endured unthinkable experiences.

“He said that working in the garden was the first time he has felt total peace,” Ewing said.